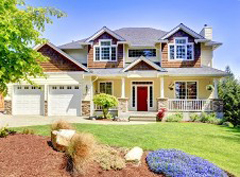 The Department of Commerce reported July sales of new homes dropped by 2.40 percent over June to a four month low. Analysts noted that although July’s reading of 412,000 new homes sold fell short of expectations and June’s reading, the new homes sector is volatile and subject to change.

June’s reading of 406,000 new homes sold was revised to 422,000 new homes sold; expectations were based on the original reading. Three of four regions posted a slower rate of growth for home prices with only the South posting a gain.

The average price of a new home in the U.S. rose to $269,800, which is 2.90 percent higher than June’s average home price. Inventories of new homes increased to a six-month level based on current sales pace.

This was the highest inventory of new homes available since 2011. Strict mortgage credit requirements and an elevated national unemployment rate contributed to the lower rate of home value appreciation and higher inventories of new homes.

The National Association of REALTORS® reported that July sales of previously-owned homes rose from June’s revised figure of 5.03 million sales to 5.15 million sales and achieved the highest reading for 2014.

Lawrence Yun, chief economist for the NAR, said that a growing inventory of available pre-owned homes for sale and strengthening labor markets contributed to sales growth. Mr. Yun said that July’s pace of sales was expected to continue based on mortgage rates holding steady and rising rents for apartments.

The inevitable rise of mortgage rates and increasing home prices were cited as factors that could cool existing home sales in coming months. With the Fed scheduled to complete its asset purchase program in October and changes to the Fed’s target federal funds rate expected within months, mortgage rates are expected to rise. Affordability looms as an obstacle to sales; home prices continue to rise as wages grow at a slower pace than home prices.